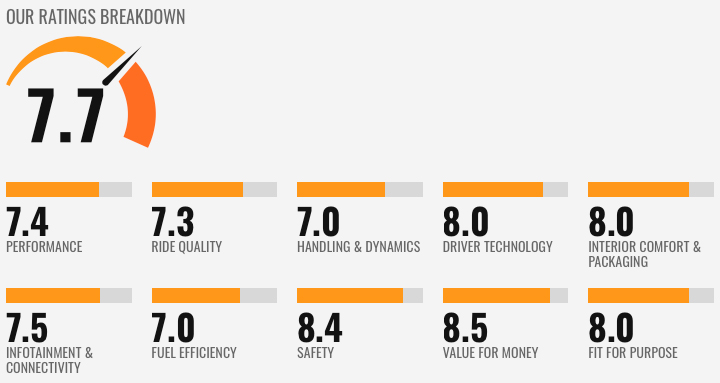 While not new to Australia, the SsangYong brand still has a relatively low profile. Could the fresh Korando medium SUV be the model to change that?

If asked to name a Korean car, SsangYong might be the last one you think of. Hyundai and Kia probably rate a mention, and buyers of a certain age might still remember Daewoo, but in terms of brand recognition, SsangYong still has some way to go.

It’s working hard to turn the tide. It plays in some of Australia’s hottest market segments with a dual-cab ute, and small and large SUVs padding its range. Now it enters 2019’s biggest-selling new-car segment with a fresh medium SUV: the 2020 SsangYong Korando.

Value pricing is the first weapon in the brand’s attack. For the mid-spec Korando ELX you see here you’ll pay $30,990 drive-away with a 1.5-litre turbo petrol engine, six-speed automatic and front-wheel drive. If your budget is tighter still, there’s also an auto base model for $2000 less or a base manual for $4000 less.

Anyway, stacked up next to competitors in the class with an auto and two-wheel drive, you’ll pay $32,990 plus on-roads for a base-model RAV4 GX, $32,880 plus ORCs for a Mazda CX-5 Maxx – the two biggest sellers in their segment – or if you’re more budget-conscious, the Mitsubishi Outlander ES is a matching $30,990 drive-away.

Those are all base models, not mid-spec like the SsangYong, mind you. And do check for offers and drive-away deals, as these change often during the year.

Not all medium SUVs are created equal, however. The Korando is one of the more compact cars in its class at 4450mm long. A Kia Sportage is also compact yet still 35mm longer, an Outlander is a substantial 245mm longer, but at least by a small margin the Korando is a touch wider than most cars it competes against. 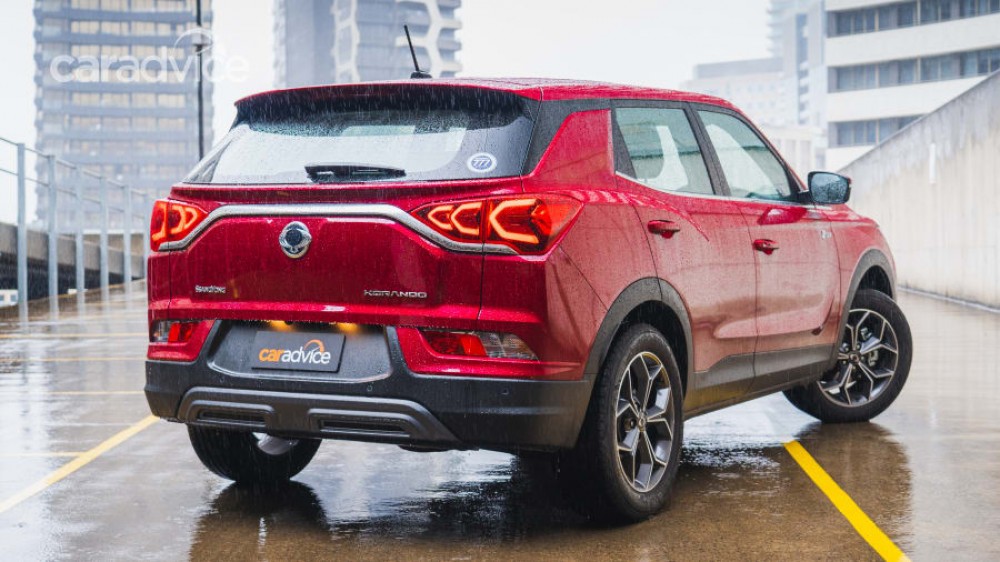 The powertrain is a closer match, depending where you look. With a 1.5-litre four-cylinder turbo petrol engine, complete with direct injection, the Korando gets off to a good start with 120kW and 280Nm.

Although not a direct competitor, the same size and spec engine in a Mitsubishi Eclipse Cross produces 10kW and 30Nm less, so too the Volkswagen Tiguan and its 1.4-litre turbo. Honda’s 1.5T CR-V is 20kW ahead but 10Nm behind, so horses for courses really.

Step inside and the Korando is familiar, without being outright striking or particularly unique. In fairness, that’s not a bad thing. It’s logical, easy to get your head around and intuitive to use, but perhaps not completely cutting-edge.

There’s an 8.0-inch touchscreen that draws your attention to the centre of the dash. It plays host to AM and FM radio, along with Bluetooth and auxiliary connections, but not DAB or inbuilt navigation. It’s not the most intuitive or up-to-date-looking system, but it does come bundled with Apple CarPlay and Android Auto, which makes it as current as your phone allows. 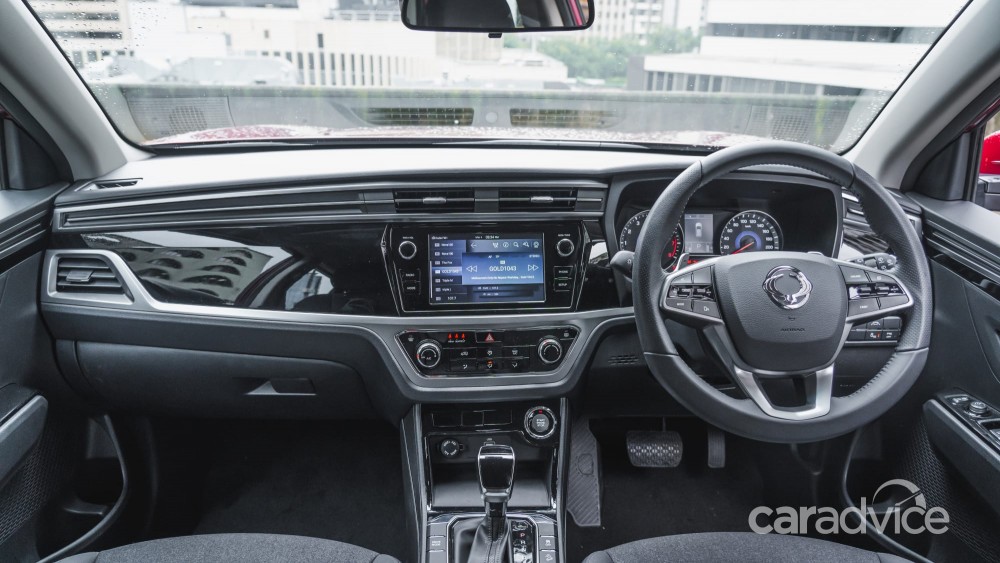 It’s pretty simple elsewhere – you get traditional dials with a small 3.5-inch central display for the trip computer and digital speedo. There’s a soft-touch dash, but more sturdy plastics elsewhere, and a huge gloss-black swathe across the dash that passengers didn’t always like. It’s angled like a funhouse mirror and reflects the front seat occupant’s face.

Features like that are easy to find in the brochure, but what you won’t find mentioned is the inbuilt beep for everything. Accelerate too vigorously and the Korando will beep at you (yes, really). Open the car door with the engine running, to open your garage door, and there’s more beeping. The reverse sensors have two tones of beep, which can be confusing, and even the indicator sounds like an ’80s video game: more of a beep-boop than a tick-tock click.

Warning sounds aren’t necessarily a bad thing, of course, but too many lessens the impact of important ones. The Korando acts like the SUV who cried wolf. 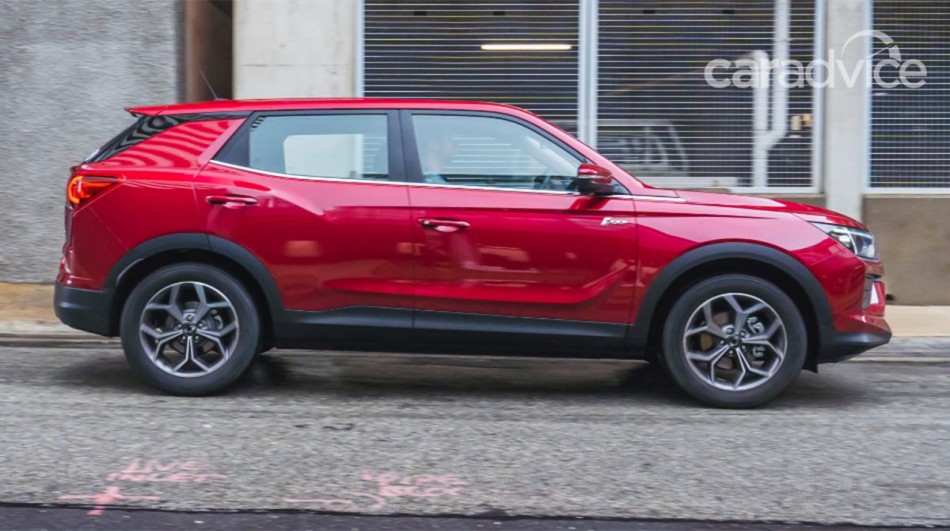 What about on the road? Is the new Korando a wolf or a sheep? Well, possibly a little of both.

Make no mistake, while the performance on tap is nothing to get excited about, there aren’t many situations where you’re left wanting, and that’s a positive. The Korando also gets some wriggle room for being cheap. It probably doesn’t need it, though. The SsangYong is a complete and well-resolved package.

First, the bad – there’s evident turbo lag. As you squeeze on the accelerator, the engine ramps up, and a moment later the boost hits to create a secondary surge of acceleration. It’s the kind of effect that makes old performance cars fun, but quickly loses its novelty factor in slow, steady traffic for a car that doesn’t claim any kind of sporting bent.

Were it not for the speed-limiter function, the Korando would be tiresome in suburban streets. It seems grumpy about maintaining a single speed at the driver’s command, with a notchy accelerator that requires constant adjustment.

There is a ‘sport’ driving mode (along with a winter setting), but it doesn’t really do much to make things more sporty. There’s more weight for the steering as assistance is dialled back, but no obvious change to throttle mapping or transmission shift patterns.

As flaws, though, they’re quite minor. Nothing that couldn’t be lived with or adjusted to with time and familiarity, and really most evident because I spend my time in multiple vehicles each month, which can exaggerate these kinds of quirks. 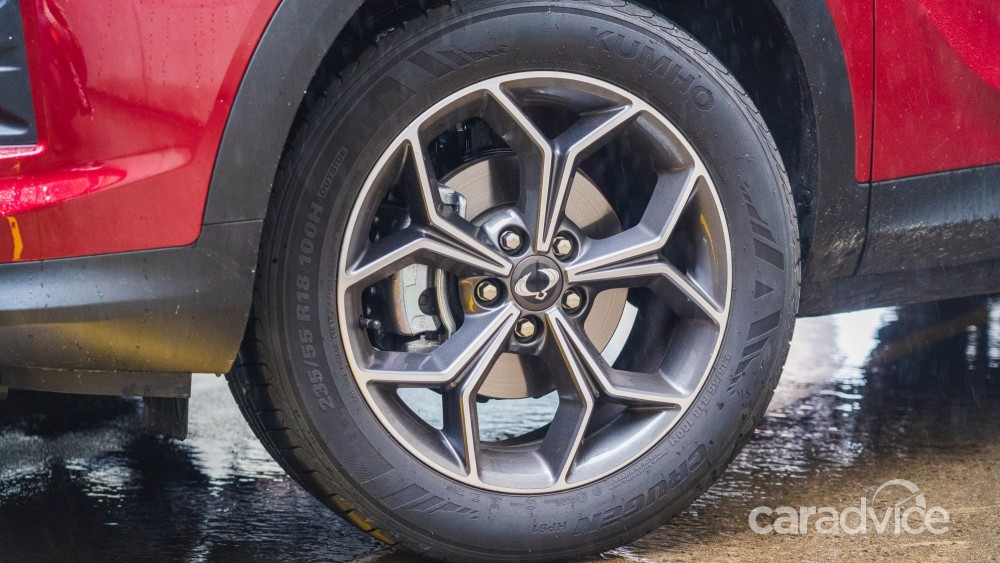 SsangYong still has room for improvement in the areas of suspension and steering. Whereas Hyundai and Kia invest time and effort tuning ride and steering to Aussie roads and conditions, in the Korando there’s just a hint less body control, some more wallow and bounce, and a feeling that the front wheels are doing all the pulling instead of a more neutral handling balance.

Not enough to upset you in any significant way, but just enough to be detectable. I mean, it’s not like SsangYong is new to the game, but it hasn’t been working on finishing touches as long as some of its peers.

Otherwise, the experience is a good one. The engine has a nice torquey oomph when you stomp the accelerator pedal. There’s plenty of tyre roar from the Kumho Crugen tyres even at around-town speeds, but (thankfully) little in the way of engine and wind noise.

There’s a real sense that the Korando would make an ideal rural SUV. Dirt roads and gravel verges won’t upset it, there’s raised ride height, good visibility and decent comfort. It lacks all-wheel drive (only 2019’s top-spec launch-edition cars were AWD equipped), but is good enough for a life of rural – not rugged – duty.

At least, it would be if it came with a spare wheel. Given the chunky dimensions, you’d expect there might be a full-sized spare to keep you up and running. There isn’t, not even a space-saver. Instead, a compressor and puncture repair sealant are there to keep you on the go.

In a quirk of specification, there are also the mounting points for a dual-layer boot and cargo blind, but these aren’t supplied as standard in Australia. You have to equip them yourself from the accessory range.

There is a solid 550L of boot space to fill, though, or 1248L with the rear seats folded down. You’ll find tie-down points and bag hooks within, but if you’d like a level floor with the seats folded (or no load lip to lift over), you’ll need that boot floor accessory.

Rear-seat occupants fare well, with very generous leg room and decent overhead space thanks to the tall and boxy roof. There’s also the ability to adjust the backrest angle between two positions to eke out a little extra comfort on longer drives. 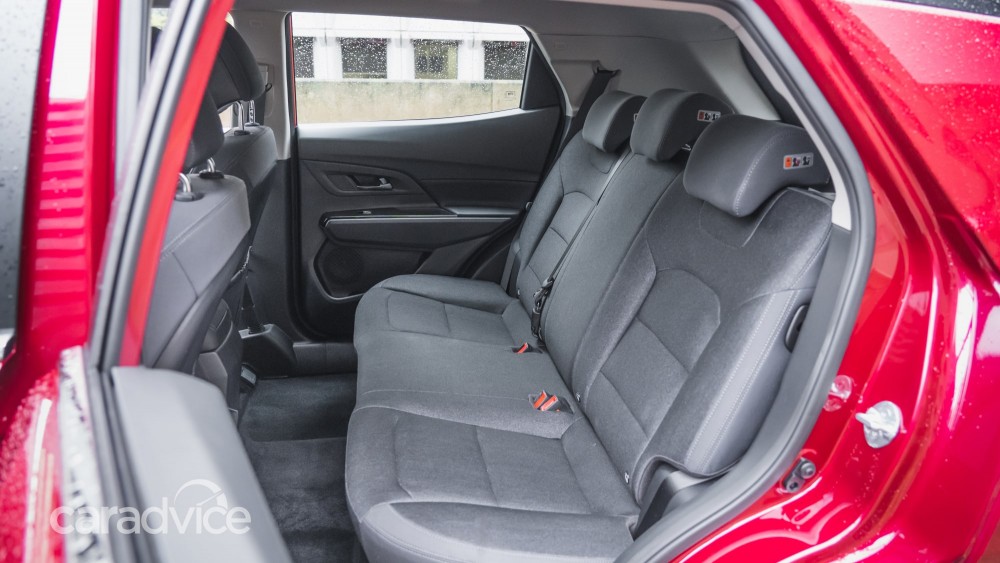 The middle occupant does have to straddle the transmission hump, but all three rear seats are comfy and appropriately proportioned for adults. There’s no face-level or rear of console ventilation, though, if that’s a priority for you.

SsangYong also wants to cement itself as a leader in after-sales care with a seven-year/unlimited-kilometre warranty, seven years’ roadside assist, and seven years of capped-price servicing. The 12-month or 15,000km service intervals are set at $295 per visit for a basic oil and filter change.

If you’re keeping an eye on your fuel bill, SsangYong suggests you’ll use 7.7L/100km. On a mix of urban and rural roads, we settled on a still-decent 9.8L/100km, but the Korando asks for a diet of 95RON premium unleaded. 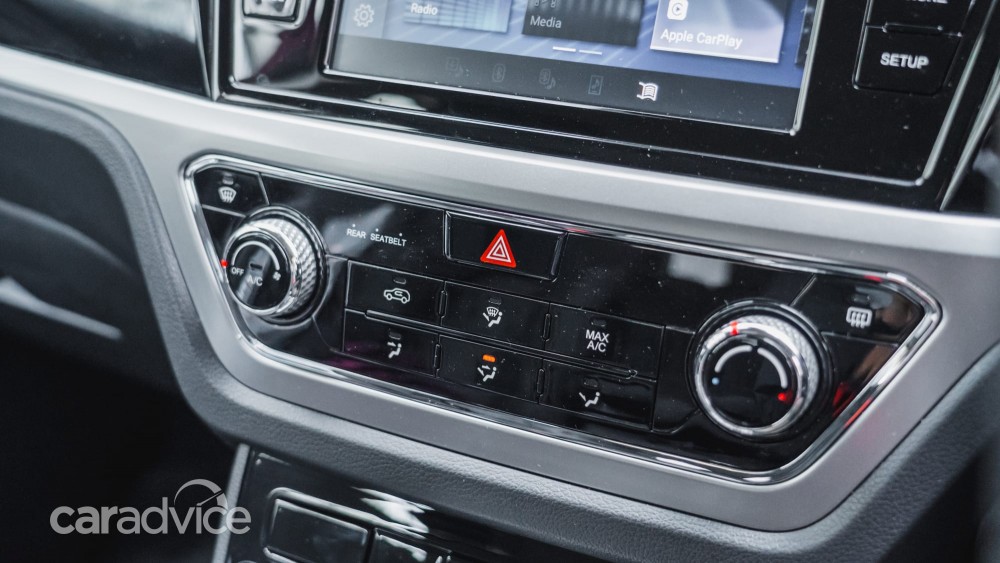 Boil it all down, and while the Korando doesn’t necessarily lead the medium-SUV class in any area, it puts its best foot forward in terms of space and practicality. And with pricing set below the starting mark of most rivals, this ensures strong value for money.

It might not sway buyers looking for upmarket brand cachet, but value-conscious new-car shoppers should find everything they need in the newest Korando. While there are still a few rough edges, most of the basics are more than just covered, which makes SsangYong’s newest model a surprising quiet achiever.

Strong price and positioning against rivals

Big back seat and boot

Tyre noise even at low speeds

Too many unnecessary warning beeps

You'll have to explain what a SsangYong is everywhere you go 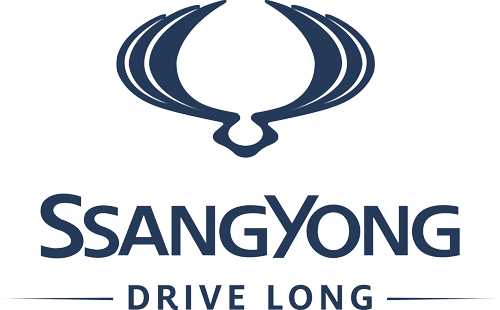 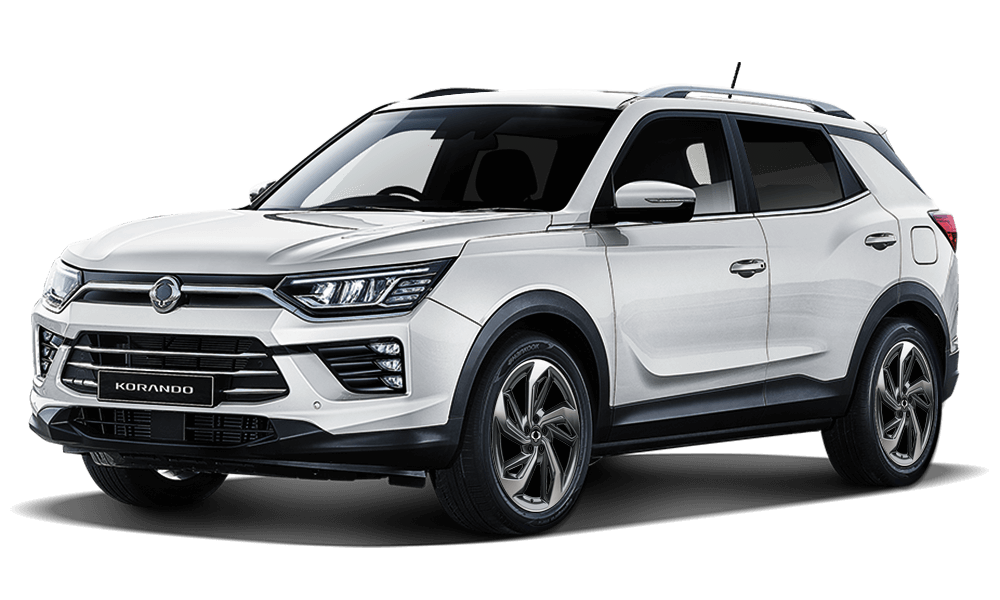 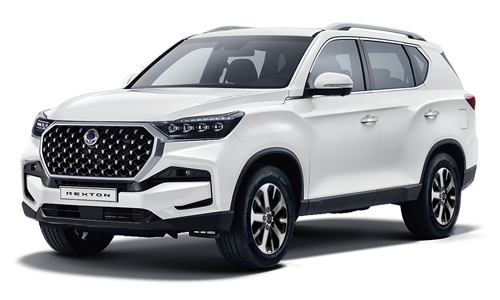 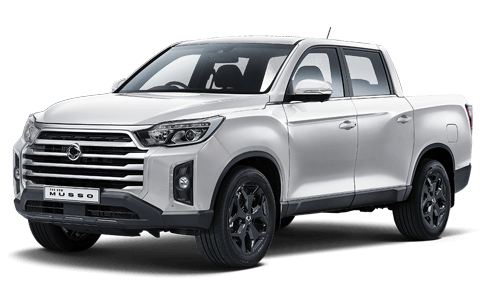 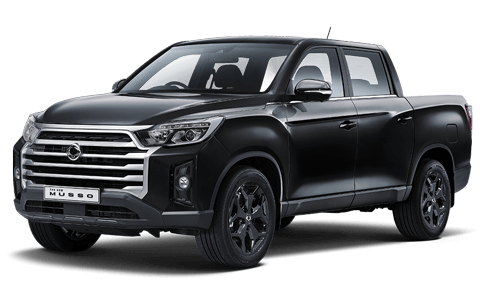 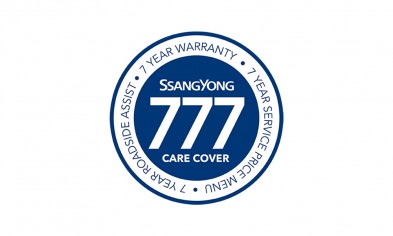