The SsangYong Korando Ultimate is a surprisingly well-executed SUV from the Korean challenger brand.

Take a look at the 2020 SsangYong Korando and see if you can spot anything about its lineage that looks familiar. No? Me neither. But, what if I were to tell you the Korando started its life way back in 1983 as a Jeep CJ-7? Actually, the family tree goes back even further, to 1964, when the company then known as Ha Dong-Hwan Motor Company began assembling Jeeps for the US armed forces and United Nations Command.

The waters muddy in the 1970s and ’80s, but in 1983 the now CJ-7-based Korean-assembled Jeeps were renamed Korando. They remained in production until 1996 when the second-generation, based on a shortened SsangYong Musso chassis, was launched into Asia, Europe (1997) and Australia in 1998.
Now in its fourth generation, this all-new SsangYong Korando couldn’t be further removed from that Jeep genesis, now looking more like one of its cross-town rivals from Kia or Hyundai. No bad thing.

On test we have the 2020 SsangYong Korando Ultimate petrol front-wheel drive, one of four petrol and two diesel variants in the wider Korando range. Priced at $36,990 drive-away, the Korando plays, ostensibly, in the small-SUV segment.

Conversely, a quick peek at the new Mazda CX-30, itself a contender in the small-SUV segment, shows the Korando is measurably longer, wider and taller. We’re gonna go with medium SUV, then. And that makes this little (medium) Korean a tantalising prospect, certainly on price and equipment.

That level of equipment is usually found only in vehicles much higher up the medium-SUV food chain, so SsangYong’s play for the lucrative segment is off to a good start.

Sliding inside the Korando is an exercise in pleasant surprise. It’s a well-resolved cabin, with obvious design influences from the Germans, but it all gels nicely. Doesn’t feel cheap either. Even the doors close with a satisfying ‘thunk’.

Everything is logically laid out, while the mix of materials is okay. There’s a bit too much piano black for my personal taste, and if we dig a little deeper, there are some fitment issues. But overall, the cabin is presentable and functional, and feels a step or two above what its pricepoint suggests.
The seats are comfortable, the steering wheel feels solid, and the 10.25-inch driver display is configurable to suit your own style. It’s a bit BMW in its design and layout, but arguably better in its functionality. Kudos.

The second row is spacious, though, with plenty of room in all the key areas. The seats are comfortable, although the middle pew is elevated and firmer than the outboard seats. Those outboard seats are heated, too, a rarity at the level of the segment. It’s light and airy there, with good visibility thanks to a generous glasshouse with a user-friendly window line. Sunroof helps, too.

A key factor in the segment is boot space. With the back row in use for people, there’s 551L of cargo area. That expands to 1248L with the second row folded in 60:40 fashion. It’s a deep boot, too, with a high lip so you’ll be lifting your stuff in and out, rather than sliding. Some hooks will keep your bags secure.

That depth also hides another shortcoming. No spare tyre, just some goop and an inflation kit. These things matter to some buyers.

So far, so good. Sit inside and it’s all pleasingly surprising, with a level of equipment that’s hard to believe for the money, and enough refinement to make this feel like a nice family SUV. But how does it drive?

The net result is the Korando is a willing participant on the road, with a sprightly manner that we found, quite frankly, a bit surprising. There’s a moment’s hesitation from the six-speed auto transmission sending drive exclusively to the front wheels, mainly from standstill or when you ask more of the otherwise willing little engine for an overtake, say. Circumspection is your friend.

On the move, though, there’s little to complain about, the transmission working nicely in tandem with the four-pot turbo to have you hustling nicely.

Its road manners, too, are decent. The ride is compliant and, importantly, quiet. Bump absorption is good – MacPherson struts up front, multi-link at rear – even over larger hits. There’s little in the way of crashiness or porpoising, the Korando simply absorbing the detritus of our modern roads with a calm demeanour.

There’s simply an easy-going nature to the Korando in the way it drives and handles. Is it a firecracker dynamically? No, nor does it need to be. But, the Korando is perfectly fine at being shown some hustle, if that’s your bent.

There’s one area, though, which could be improved. One CA colleague who spent time behind the wheel noticed the Korando wasn’t the happiest thing in the wet, with a propensity to understeer. Not ideal. Maybe swapping out the OEM Nexen rubber (235/50R19) might offer some improvement.

The Korando wears a five-star ANCAP rating awarded in 2019, thanks to decent crash-testing results (it scored 88 per cent for adult protection, 86 per cent for child occupant, and 68 per cent for vulnerable road user) married to an extensive suite of active safety systems.

SsangYong’s ‘777’ marketing statement shows how serious it is about being considered in a crowded market. That’s seven years’ warranty (unlimited clicks), seven years’ roadside assistance, and seven years’ capped-price servicing. Servicing intervals are every 12 months or 15,000km, and each scheduled visit to the workshop will cost a completely reasonable $295.

Our week with the Korando Ultimate netted a combined fuel consumption return of 11.9L per 100km, which is a tad on the thirsty side, even more so when compared to SsangYong’s 7.7L/100km claim. In mitigation, a big chunk of that was spent in the grind of Sydney traffic, and we’re sure more and longer highway runs would see that number drop substantially. The Korando also requires 95RON as a minimum.

There’s a lot to like about the SsangYong Korando. It’s certainly a value-packed proposition when you consider just how much has been crammed into this challenger-brand small-to-medium SUV. That it drives, mostly, as well as it does was a pleasant surprise. And that’s the one thought I keep coming back to when I think about the SsangYong Korando Ultimate: an engaging and surprising little package.

Hesitation down low from the auto transmission

DAB+ radio would be nice 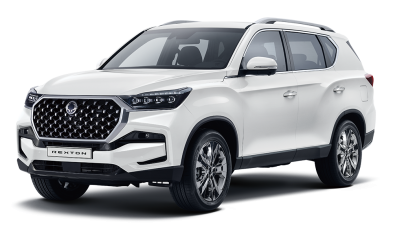 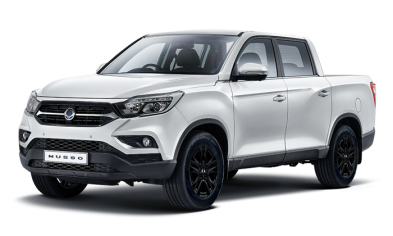